Lydia woke up at 630am again. I got up and fed her and changed her nappy. I quite like the quiet early morning feed watching the sun rise over the city. I bought her back into bed for a cuddle with Daddy as Tom didn't have to rush off this morning because his car was going in for a service.

After Tom had gone to work, I got Lydia dressed. The first lot of clothes I tried on her were way too small, so they went in the 'to pass on' pile and we tried another outfit. She's currently between her 6-9 and 9-12 months clothes and some of the 9-12 vest barely fit over her cloth bum without vest extenders. I've decided baby clothes are communal property like hair ties or lighters, and am passing on most of her clothes as most were hand me downs to us. They're in them for so little time. I'm sure if we have another then a batch will make its way to us. I've kept a few favourites back of course, but less than I thought I would.

Once dressed we went down for breakfast, today's was porridge with grated apple and mashed banana. I tried the fancy granola that was a welcome present at the cottage we stayed at the past weekend. Got some washing on, had a little play and then went out to drop off and pick up parcels.

We have a Quinny Zapp X pushchair and the end of one of the frames in the hood had worn through. We've got their lifetime warranty on it, so after a short email, they'd posted out a new one. Which is great. They'd accidently posted out the wrong part, and I kept missing the DPD driver, so I'd arranged to pick up the new parcel and drop off the old one at the depot in Hedge End.

When I got there, there was a bit of palaver getting in as I couldn't take the buggy through the turnstile, so need to use a gate, and then they couldn't find the paperwork for the parcel I was dropping off. But we got there in the end. Autumn Socks Day approaches, so I had sock parcels to send to the godchildren. As we were on Hedge End anyway, I decided to go into the village proper and use their post office.

Inevitably, Lydia fell asleep on the short drive, so I kept the carseat on the pushchair wheels and she slept through the post office and most of a charity shop browse. I picked up a bargainous new santa hat for £1, and then we had a little walk around the high street back to the car. She fell asleep again in the car, so I treated myself to a Pepsi from the KFC drive through and sat on our drive again to make sure she got a good nap.

When she woke, we then went up to the pharmacist and the doctors to get my online patient access login. For some reason I'd been deleted!

Once home, it was time for a feed and nappy change, then lunch. Lydia had cheesy mash, with carrot sticks and cabbage strips to play with. She wasn't in to using a spoon, so I put her mash on the table and she ate a bit with her hands. She got fed up eventually, so I got her cleaned up and we went to play again. I put some Advent music on Spotify on the family room TV, and she had a nice time playing, rolling around and then quietly lying back to listen every now and again.

Whilst she was playing, I wrapped some Christmas presents, stopping to join her on the floor when she wanted a feed. I do worry a bit about how she'll cope with no feeds at nursery when she goes but that's still 3 months away, who knows what her feeding pattern will be like then.

Tom got home relatively early, and he and Lydia played together for a while. She's obsessed with his retractable work ID holder and makes a beeline for it if she can see it. She's so determined to get it. We started dinner together, and Tom fed Lydia her tea and rang his dad for a catch up. I made some salt dough whilst we were waiting for dinner to cook, and made some Christmas decorations to give as presents. I'm going up paint them blue and get Lydia to finger paint or hand print on them in gold paint.

I've wrapped a few more presents after dinner, done a little more knitting, tidied the kitchen, unloaded the tumble dryer and done my physio stretches. Lydia was on her front when Tom went to check her before bed, so we tried rolling her over, but she woke up and rolled straight back. Where she can roll both back to front and front to back in the day, hopefully she'll be ok on her front. There's been a few cries, but I think they were more like when she cries in her sleep teething. 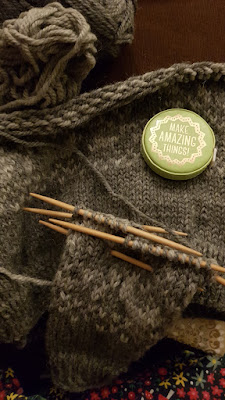