Sorry first fail of the year.

Yesterday Tom was on call, and was called out pretty early doors until teatime. So it was a mummy and Lydia day. We started it by going off to church to do the remembrance flowers.

Flower arranging with a toddler in tow was nearly impossible, but I eventually managed it. We had a brief tour around the craft fair happening at church that day, and set off to the baker for bread, and buns for a mid morning snack. 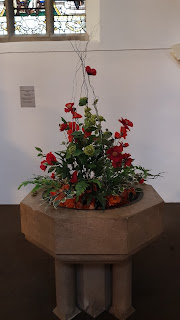 Eating our buns in the pouring rain, we carried on into the park where Lydia went on the swing, pretended to drive the pirate shop and splashed in puddles. We carried on till we were completely soaked, then went on up the hill home. Even the swans seemed to be hiding from the rain under arches of the bridge.

I thought she might nap on the walk, but no such luck, so after a swift nappy change, I caved and gave her some milk. This did the trick. I lunched, knitted and watched some more Gentleman Jack whilst she napped as I'm coming down with a cold and feel rotten.

Tom came home to Lydia having her late lunch or early tea, then we had some playtime until we were surprised by tom's mum and stepdad. We’d said they could stay the night as they had a patry to attend in Southampton, but we'd completely forgotten about it.

So there was more playtime for Lydia whilst I madly tidied enough space in the spare room and Tom made drinks. Once they were off out again, Lydia had a very extended bedtime which was challenging. So we didn't get supper till 930 or so. The others arrived back just as we were going to bed.

Tom was called out around 2am just as I was coming back to bed after a Lydia wakeup and he came home again around 5am to Lydia feeding in bed with me after another wakeup. We all slept till 8am ish when I could hear the others helping themselves to breakfast.

We left Tom sleeping and Lydia and I went down to breakfast after an extended session of getting dressed, including putting on her snowsuit. It wasn't long before we waved them on their way back to the farm. Tom got up around 9am and we were out the door to walk to town to meet NCT friends for soft play.

We were trying a new soft play in the Marlands at the recommendation of a friend, and as these things go it, it was well done. Clearly defined arras by age, an arts and crafts room and themed rooms like a vets and shop to play in too. It was great to catch up with everyone and see how the children had grown.

Come 1130, Lydia was asking for food, so we made a move. As she snacked,&nbsp; we did a bit of clothes shopping for her, then had a pleasant but very wriggly lunch in Yo Sushi. I wanted some wellies and pjs for her, and had had no luck trying to get second hand. I hate how most kids stuff is covered in branded characters, so was on the look out for plain bright colours. Find pjs, but not wellies.

Then we were on the look out for anti tip straps for furniture ahead of moving her to her toddler bed, but none of the shops had any in stock. So ordered those and the wellies online. A bright walk back in the golden hour crisp autumn light whilst Lydia finally napped, with a stop for veggies for the week on the way.

Once home it was the usual work of writing week prep, all packed lunches and sorting nappies for the nursery bag between playing with Lydia and video calling the godmothers. Another extremely long and arduous bedtime. Think we're in the 18 month sleep regression, with separation anxiety mixing with teething. Eventually a dose of Calpol did the trick in time for me to have another 930pm dinner.