Up early to a drive to Oxford. Had to stop at Winchester to buy a tyre gauge and pump when a tyre warning light came on. All sorted quickly enough and back on the road.

Morning spent working from a coffee shop with wifi enjoying the snippets of others academic conversations. An informal one on one between manager and staff from a museum, full of office and museum world gossip. "Well she raised my hackles when I knew her at the British Museum. Very school marm-ish" Some ad hoc film reviews, and a conversation in German about a social policy essay. Which I only got the gist of as the title of the essay was always mentioned in English. German students studying in Oxford maybe? 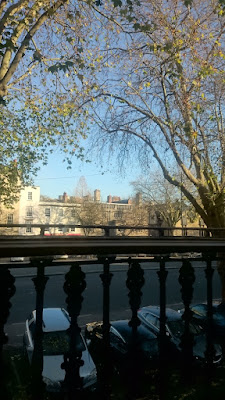 Afternoon at a workshop, then a long walk back to the park and ride car park due to a coach breaking down on the corner by Carfax Tower. All the buses were messed up so I just kept walking.

Then home along to Southampton and the Mayflower Theatre, for an evening with Ross Noble. I laughed and laughed and laughed. I cried and coughed with laughter. His surreal wandering comedy was a great tonic, even if Southampton did decide to throw him a curve ball by having a blind man, a transitioning transgender person and an adherent of S&M amongst the people he picked for a chat. Oh and the extended section about Morph trying nipple clamps....
Posted by Alex Tarling at 11/28/2016 11:26:00 pm