Left me standing by the sea...

(Points to anyone who comments with the name of the song plagerized my in title.)

Little things can often make a huge difference. My moods have been all over the place in the last few days. I think the changeable weather and my hormones must be having a huge party somewhere and that's what's upsetting my insides.

But those little things. The rain, the rain the rain. And the rain came down and the floods went up. It's raining even harder than yesterday if that's possible. I'm so glad that when I went out with some old friends on Wednesday it was good weather. I'm still getting used to the novelty of doing things on my own at home. At uni, I'm was often on my own during the day as I picked obscure units and thus only saw my history friends in the set units. Shopping, eating lunch, etc etc I would do on my own and enjoy. I don't really like clothes shopping with other people etc as I worry I'm boring them, and like to try on random things.

Here at home, I was used to going out in Bath with Rob, and it all feels a bit weird to do these things alone. But I sucked it up as some random nationality says, and bought my Subway sandwhich with loads of extra pickles and olives and read the paper. I sat under a big tree in a square that's lit up with fairy lights and it was lovely to be alone in the crowds of shoppers for a little while. I also tried to get hold of loads of people on my phone as I realised I had loads of things I wanted to check, like calling Sarah to find out where I was supposed to meet her, and Chris to check about Amsterdam money. Though Chris you never answer your phone, and I had Sarah's old number.

When I'd finished I got the sudden whim for a pint. So a pint of Guinnes it was, in an arty bar, all alone with my paper under a parasol and gas heater. Now this felt weird for another reason. I hardly ever drink alone. Uni is where I do most of my drinking, and it's either with the group of four from my halls last years, or the people who'll be my housemates next year or a large group of male engineering students. However this felt nice and civilized and very grown up.

The rest of the evening was spent drinking cocktails with people who had been classmates at school. Again it was a little thing, but these people are people who, no matter how long we go with out seeing or speaking ot each other, we manage to seamless pick up where we left off. That's as comforting and nourrishing for the soul as big fluffy duvets on cold November mornings.

Yesterday I navigated delayed trains, and was crammed like sardines in a tin into a two carriage train. People actually got left behind on the station which I've never seen before. Except at tube stations and uni bus stop, but's that's slightly different, what with the services being more regular.

At home the highlights of my evening were threefold. The first was getting hold of Chris on the phone, even though in our catching up over his trip to Ireland, I forgot to ask about the Amsterdam money. Its always nice to have a satisfying chat. The second was doing half the old Mr Motivator video with my mum and sister. It was naff and cheesy, but I could definately feel it working my muscles. Remember Mr. Motivator?

His terrible naff lycra outifts? He even has a myspace!

But I have to say his exercise video does give you a work out. Which is what you want really...

The final highlight was finding an albeit weak unsecured wireless signal in my room last night, meaning I can use the internet on my laptop. The one problem is that in order to connect, I needed to hold my laptop up to the window. I compromised. See the diagram below. 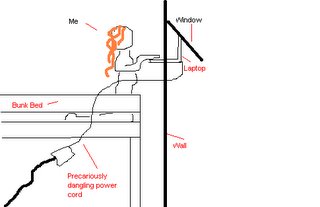 Yes that was lovingly crafted in MS Paint at work. Yes my hair is that orange, but I am going to rectify that with highlights this evening.
Posted by Alex Tarling at 8/18/2006 12:15:00 pm