Yesterday, got Lydia up and dressed and walked her to preschool with Phoebe in the carrier which was way easier than pushing the pram. Will do that again. Phoebe had nice long sleep in the carrier on walk home too.
Rest of the days naps were in the wrong place though. Need to work a bit harder on lining them up. Went to Shirley early before swimming to stay out the way of the cleaner and got a cute Christmas dress with robins on it for Phoebe for £2.00 in a charity shop. She then needed a feed and change and the baby change in Sainsbury's was closed so had a cheeky chai in Costa to make up for using their loo.
Went on to swimming, only two of us in the class this week, Phoebe made it through the whole class without needing a snack or being sick which made things less stressful. Fed her in the car for a long while after then on to Jon and Hannah's. No Rebecca today so we ended up just chatting about babies and drinking tea.
Home just in time for my counselling call. Today's mini lecture was on self care. No useful advice on how to actually fit stuff like that in. Some stuff on thinking about your values and living them, again not sure how that works with a tiny baby.
Tom got Lydia from preschool then went off to see his dad. Lydia had extensive evening snack whilst listening to Sarah and Duck radio until bedtime. She went to bed relatively smoothly for her at the moment.
Phoebe was still feeding when my friends Jo and Claire arrived for dinner about 8pm and wouldn't settle. Ended up feeding her at the kitchen table as I was starving and she eventually went to sleep about 9pm. Lydia came down once crying because of a bag dream too.
Jo had bought nibbles and Claire onion tart to go with the pear and walnut coleslaw I'd made earlier. We'd all had days of it so it was good to have a moan together. Tom joined us for a glass of wine when he got back and they left about 1030. Phoebe fed to sleep ok, Lydia in to our room once in the night.
Today, Lydia came in around 645am and I helped her get dressed. She was a bit of a pickle. Hasn't been very good at listening to instructions recently. Tom took her up to nursery on his way to work.
I then got Phoebe dressed and tried on some of the clothes from my maybe pile. Phoebe needed a long feed so I missed the first 20 mins of my live Pilates class. Decided to do 20 mins of a prerecorded one as something is better than nothing.
Did a nappy change and as I was getting things from the car ready to go out, Tom arrived back from work and carried some stuff in for me. Made it to church for v about 1030am and arranged my Remembrance flowers around feeding Phoebe. Was pretty hard work as she wasn't very happy to settle for a nap. Think the flowers came out ok. 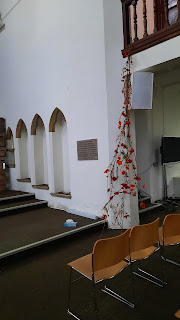 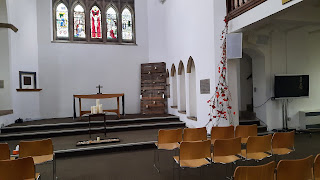 Home about 1pm, Just enough time to grab some food before Tom and Lydia collected me on the way back from getting Lydia. Then off to Andover to see Tom's dad. Had to stop once in the way to wake Lydia up.
Spent about an hour and a half with Tom's dad. He seemed much brighter compared with when I saw him the other day. Lydia did really well but was climbing the walls by the end. We went for a walk around the town centre after to try and tire her out. Had said we could have chips for tea, so picked up some of those on the way home for a car picnic. Phoebe had more milk whilst everyone else ate.
The chippy is in the parade of shops in the new housing development on the land that was Tom's grandparents' farm. He did a bit of the 'when I were a lad, all this were fields". Drove home in time for Lydia bedtime. Kept Phoebe up an extra 30 mins to allow for her last nap being late due to being in the car. Let's see what happens when I try to put her down....
Posted by Alex Tarling at 11/12/2021 08:18:00 pm