Today Lydia woke at 5 am for a feed and was freezing, will make sure she has an extra blanket tonight.

Got up and dressed, put Lydia in my favourite red rosebud onsie for the last time as she's too big for it really. Mothercare seems to run small really as it's 6 to 9 months. She's long bodied but I'd expect it to last a bit longer.

Had a breakfast of toast and made Lydia a packed lunch before going to Tots at church. Lydia had fun playing with some toys, having a go at painting fireworks, listening to a Bible story and singing. She's started bobbing along to music recently and was shouting and chatting to the bigger kids. I did my good turn for the day by lending a muslin to a mum with another smaller baby who'd forgotten one. 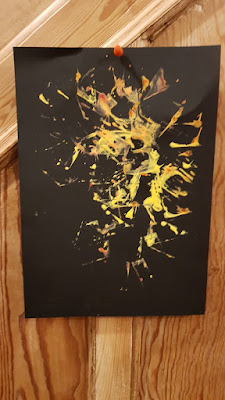 There was an impromptu soup lunch after which was nice, and I got to chat in-depth with one of the other mums for a bit. Then I fixed an email issue on our church outreach workers laptop, before coming home to feed Lydia and pick up my dress makers dummy.

I got the dress makers dummy loaded up in the pram and Lydia in the sling, and enjoyed the funny looks on my way back to church as it was flower arranging time. I've made a rod for my own back with the remembrance Day flowers and it being the 100th anniversary of the end of the First World War, I thought I should do something special. My friend Emma has lent us her period nurses uniform with a clever design on the apron which shows the archaeological record of a battlefield which I've incorporated this year. So that covers land, we've got a blue attachment in the font for the sea, and a flying dove for the air. 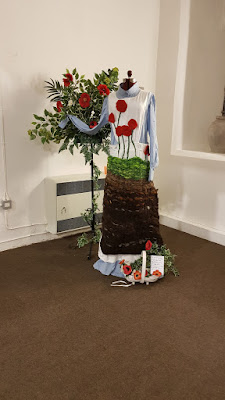 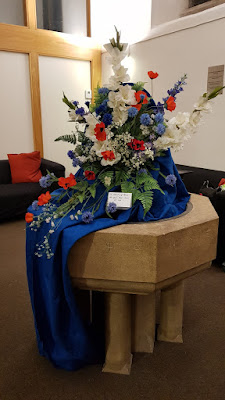 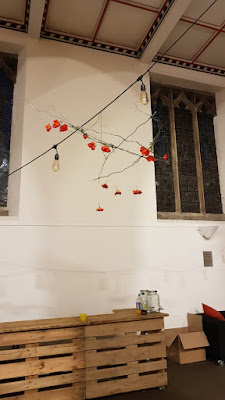 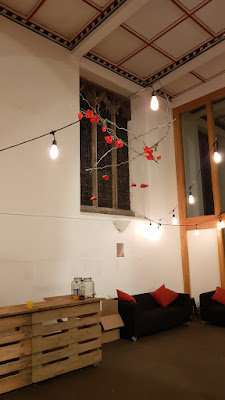 Tom joined us at the end of the afternoon to help baby wrangle which was useful. Since we've got home, we've been tag teaming on baby entertaining, and cooking tonight's dinner and lasagnes for later in the week. Lydia has just gone to bed after a splashy bath and a spot of fireworks watching.
Posted by Alex Tarling at 11/05/2018 08:16:00 pm