I missed the main Pride celebration in Belfast this year so I really wanted to get to the church service on the following day. I remembered it from the year before as being somewhere I felt that the three of us, my husband, daughter and I, felt really welcome, but also a place where they were making a clear effort to make everyone else welcome as well. We live about an hour away from Belfast and we were all going to stay there that night so the morning was really busy with us trying to get ready in time, trying to work through my 5 year old daughter???s protests about going to ???boring church??? (thankfully the only bitter protest of the day!) and sorting out someone to let the cat out in the morning.

Most churches will say they welcome gay people. In many churches if you go in and tell them you???re gay they won???t physically recoil or start telling you about hell (although some will I???m sure). But it???s a different matter when you explain that you don???t want to change, that you believe you were made in the image of God along with everyone else, that you don???t want to be straight. That you want to partake, as an equal. I say this as a straight person who has been on the inside of various different church communities in Northern Ireland for quite some time, and as someone who once held the common view; that you have to love the sinner and hate the sin, that although God loved gay people it was the kind of love that parents have for their prodigal children, a love that sees being gay as a choice and a bad one, rather than a love which celebrates their being here and the unique gifts they bring.

But anyway, the three of us went to church yesterday. We sat down and spoke with friends and sorted Ana out with a church-ignoring device (Cbeebies on my Walkman. I always worry about being judged for this kind of thing but I figured people would prefer it to having a 5 year old crying and saying how bored she is throughout the entire thing).

Rev Chris Hudson began the service with the words ???Welcome, welcome,??? and if he???d stopped there it might have been enough, because I could see difference all around the small church, at the front as well as in the pews. And it???s not often that a service begins with someone playing ???Over the Rainbow??? on the organ (but I wonder why not, because who goes to church without a sense of longing for the possibilities to come? Who doesn???t wish their troubles would melt like lemon drops?)

It was short ritual towards the end of the service that I wanted to write about mainly. Chris Hudson explained why we had been asked to take a small stone as we entered the church. He held one of the stones up as he spoke about people being stoned, in the bible and more recently, the punishments meted out to those who refuse to deny themselves. Today we would also take a stone, we would set them on the altar in a circle, a symbol of unity and solidarity. People got up. The men beside me had to climb over me as Ana was sprawled out on my lap, half asleep, oblivious. They asked if I needed a stone. I explained that we???d left ours in the toilet during the pre-service bathroom trip we had to make, during which I had to shepherd said five year old right through the middle of the choir who were practising in the cramped room below the church. We???d sit this one out.

But I changed my mind about that too. I watched everyone lining up; people I knew, people I didn???t know, Priests, vicars, gay people, straight people, men, women. All waiting patiently holding their piece of stone. It made me think of communion and queuing to vote and suddenly I desperately wanted to be part of it. I asked my husband to fetch us a couple of stones and I told Ana what we were going to do. By the time we were ready we were the last in the queue and my daughter laid the last stone in the circle. I hadn???t planned for us to be so conspicuous. It is very humbling to be invited to join in a ritual of quiet defiance against a kind of discrimination that you yourself have not faced, the kind of discrimination that often came from a place that you used to revere. The kind of generosity that lays down stones instead of throwing them always floors me. I suppose that???s what church is actually meant to be like. 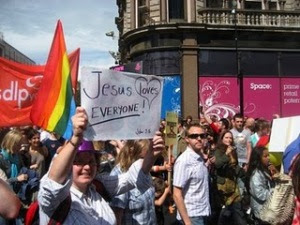 (This photo is from pride a couple of years ago. It was taken by Ian Mobsby. He said that he was impressed by this woman who just kept smiling at everyone, even when she was berated by the fundamentalist Christians who had come to protest.)

Good things for a friday.